Sixteen bikes, hundreds of kilometres of riding, and countless metres of climbing and full-throttle descending. After months of testing, it’s time to announce our first Bike of the Year 2021 winners – with the Bird Aether 9 crowned Trail Bike of the Year and Trek Slash 8 taking the Enduro […]

Sixteen bikes, hundreds of kilometres of riding, and countless metres of climbing and full-throttle descending. After months of testing, it’s time to announce our first Bike of the Year 2021 winners – with the Bird Aether 9 crowned Trail Bike of the Year and Trek Slash 8 taking the Enduro Bike of the Year crown.

Make sure you read our full Bird Aether 9 review and Trek Slash 8 review to get the in-depth verdict on why these are our top picks for 2021.

Here, we’ll give you a teaser of what makes these bikes so special and the inside track on how we put our 2021 Bike of the Year test together.

Bike of the Year is our industry-leading mega-test, now more than a decade old and ran by BikeRadar in conjunction with our colleagues at Cycling Plus and MBUK magazines, to deliver a verdict on the year’s best road and mountain bikes.

In short, we’ve tested dozens of the hottest bikes to see what’s really worth your money. (We’ll be announcing our road winners on Friday 14 April).

Our team gave this year’s bikes a proper hammering, riding everywhere from local laps of frozen-solid woodland singletrack and muddy, rutted tracks to the challenging terrain of BikePark Wales, where we were given private access to finalise our testing on closed trails.

The £3,450 Trek Slash 8, revamped for 2021, prevailed, delivering an uncompromising balance of seat-of-your-pants descending performance and the all-round ride quality we still demand from an enduro bike.

“The Slash 8 strikes the perfect balance between a fun and lively feel, and ultimate chaos-calming composure,” says Rob.

Tom’s verdict? “Whether you’re pinning it downhill or stretching your legs on the climbs, the Aether 9 delivers.”

Read on to find out how Rob and Tom tested this year’s Bike of the Year, how they choose their winners and, most importantly, for more on why the Bird Aether 9 and Trek Slash 8 took the top prizes.

Technical editor, Tom Marvin: “The Bird Aether 9 delivers in every situation, from long days in the hills to short blasts in the woods. From its geometry to its suspension, its value to how easy it is to live with, it’s hard to look past this bike. Add the ability to customise the spec and the wide sizing range, and there’s an Aether 9 package for everyone.”

Technical editor-in-chief, Robin Weaver: “The Trek really did come in and surprise us. Every lap on the Slash was an eye-opener, and the more we pushed, the more it gave back in return… This thing can seriously shift! The Slash 8 strikes the perfect balance between a fun and lively feel, and ultimate chaos-calming composure.”

The contenders | Enduro Bike of the Year

With 150mm to 180mm of travel, enduro bikes are designed to be hurled down the roughest downhill tracks but still be pedalled back to the top. The best enduro bikes are still fun when riding less full-on terrain, too.

The following bikes were shortlisted for our Enduro Bike of the Year award, with a price range of £3,450 to £4,198.

This has been the strangest and toughest Bike of the Year test we’ve ever put together.

What’s made the 2021 test so tough? Our biggest issue was getting hold of bikes. The surge in cycling over the past year, coupled with delays brought about by the global pandemic and Brexit, meant it wasn’t easy to call in the models we wanted.

That’s why we have eight contenders each in the Trail and Enduro categories, rather than 10 as in previous years, and why pricing varies more than usual.

Once again, our Bike of the Year test is brought to you in conjunction with MBUK magazine.
Andy Lloyd / Immediate Media

We could have just included the most expensive bikes available, as these weren’t selling as fast as cheaper models, in a bid to shoehorn every major brand into the test – but, while we all enjoy lusting over the latest superbikes, it would have put the winners frustratingly out of reach for most readers.

Instead, we’ve stuck with our trail and enduro categories, and packed them with some of the most exciting bikes on the market. While these aren’t cheap bikes by any stretch of the imagination, and they may require some serious saving-up, hopefully they won’t completely break the bank.

We think these bikes hit a sweetspot between attainable pricing and all-out performance. Importantly, most are available in cheaper or more expensive builds, to suit your budget.

Keen on Lycra-clad XC laps, as well as rooty off-piste, Tom is well-placed to rate the all-rounders that make up our Trail Bike of the Year test.

Our trail bike category – arguably the toughest to define – includes machines costing between £2,999.99 and £4,695 (thanks to one bike coming with the wrong spec and another’s price being pushed up), and spans rear wheel travel from 130mm to 150mm.

The way we see it, the winner should be more than capable of accompanying you on an all-day XC epic, but you wouldn’t wince at the prospect of tackling the odd enduro race on it or even taking it on an alpine holiday.

Enduro bikes are easier to categorise. If you’ve ever watched high-profile events such as the Enduro World Series, you’ll know these machines are designed for hauling uphill and then pummelling back down, time and time again.

That means they still need to feel comfortable when pointed up the side of a mountain, but possess all the poise and control of a scaled-down downhill bike when it comes to racing back down. Pricing for this category runs from £3,450 to £4,198, while travel varies from 153mm all the way up to 180mm.

With plenty of international racing experience, Rob knows what makes a good descender and led our Enduro Bike of the Year test.

From our local tracks to BikePark Wales

Once we’d sorted the bikes, the next hurdle was complying with social-distancing rules and travel restrictions. These precluded our regular tester Sarah Gamsjäger from adding her input, as in years past.

We also needed to work out how to test the bikes effectively while staying local, until our friends at BikePark Wales offered to host some private testing sessions. Although this required some (work-related) travel, it meant there would be zero risk of coming into contact with other trail users and potentially spreading infection.

As ever, we’ve spent countless hours riding, tinkering, riding some more, measuring, then riding even more, to establish a winner in each category. And it’s really not been easy.

While in previous years, two or three bikes stood head and shoulders above the rest, it now feels like the playing field is the most level it’s ever been.

We’d ridden a number of this year’s Bike of the Year contenders before, albeit in different builds, so had a good idea of what to expect. We then set about testing them back-to-back in a number of locations – including the home trails we know like the back of ours hands – to ensure we knew how each bike behaved with different terrain beneath its wheels.

Flat-out fast! There’s no holding Tom and Rob back when it comes to Bike of the Year testing.
Russell Burton / Immediate Media

Then it was time to head to BPW, where we could really push them on some familiar tracks, which helped when it came to making those all-important final decisions.

We’re confident we’ve found the right winners for this year’s test, and two bikes that fully deserved to earn their Bike of the Year crowns.

Now the winners have been announced, we’ll be continuing our Bike of the Year coverage through April and May, with full reviews on all of the 2021 contenders.

Sun Apr 18 , 2021
Matrix Electronic Measuring, Inc., a Salina-primarily based corporation, officially donated a Matrix Wand procedure to Salina Tech Friday morning as a continuation of the two entities’ symbiotic connection in the previous number of decades.  The Matrix Wand is a handheld collision restore device that can capture 3D images of cars to be stored in a […] 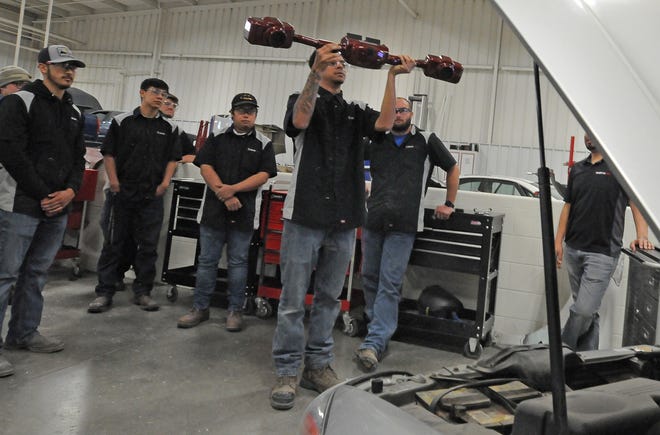