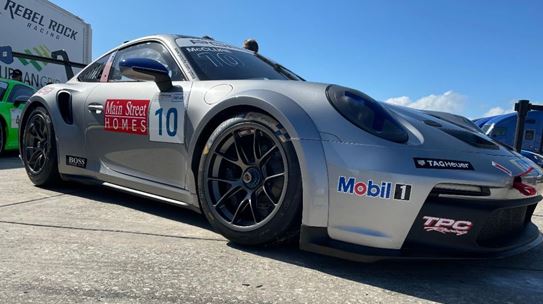 The IMSA-sanctioned series will run a doubleheader at the season opener, with the 45-minute Race One at 5:30 ET on Thursday, March 18 and Race Two at 10:10 a.m. ET on Friday, March 19. Both races can be seen on the live stream at IMSA.tv.

Porsche Carrera Cup North America brings the latest-generation Porsche 911 GT3 Cup cars to the United States, matching the world-wide platform used in Regional Championships around the world. McClure will run in the Pro-Am class utilizing the same equipment as the Pro Class.

“It’s very cool to have Carrera Cup in the United States now,” Director of Race Operations Harris Levitas said. “It’s something everyone has been looking forward to. It’s still an IMSA-sanctioned event, but Porsche is stepping up a bit with support for the series. We’re really looking forward to it here at TPC Racing.”

McClure was a regular competitor for TPC Racing in the previous-generation of Porsche GT3 Cup Challenge USA and got his first taste of the new 992-generation car in a series-wide test at Sebring just a couple of weeks ago.

“We’re really looking forward to running the 992 with Vernon McClure,” Levitas said. “Vernon did a terrific job last week on the test days, and we’re looking for some pretty promising results in the Pro-Am class. I think he’ll do very well.

The car was great for him to drive. He was so confident behind the wheel. Spencer Pumpelly is working with him, coaching in Carrera Cup. Between Spencer’s notes and Vernon’s approach to the year, I think he good get some very good results in the class.”

McClure had a successful outing at Sebring last November, earning the Hard Charger award and a top-five class finish. The confidence from that, coupled with a successful first test in the new car, should provide a boost for this upcoming weekend.

The No. 36 DSC Sport/Erin Levitas Foundation Porsche 911 GT3 Cup piloted by Mike Levitas was on the original entry list in the 991 Pro-Am Class for previous generation cars. That car was damaged in an incident a week ago at Sebring and, while repairable, will not be competing this weekend in Porsche Carrera Cup North America.


The Sebring International Raceway has been a successful venue for BMW Team RLL. From 2010 through the 2020 season the team has totaled two victories, four second and three third place finishes at the IMSA WeatherTech SportsCar Championship 12 Hours of Sebring. more >>


Paul Miller Racing back in action at Sebring


The Paul Miller Racing team returns to Sebring International Raceway in pursuit of the team’s second victory at the prestigious 12 Hours of Sebring.The 2018 race-winning trio of Madison Snow, Bryan Sellers and Corey Lewis will reunite behind more >>


Sebring International Raceway opens the gates at 8 a.m. on Wednesday for the 69th Mobil 1 Twelve Hours of Sebring Presented by Advance Auto Parts. The four days of racing action culminates with the Saturday’s 12-hour classic, starting a more >>


Denis Dupont ready to conclude the good performances of Daytona


After a promising first race weekend but stopped 20 minutes too early at Daytona, Denis is ready to conclude at Sebring. “The team has worked hard to prepare for this second race and to take advantage of our current form, I hope we can reward them at Sebring”, explains Denis. more >>


Jr III Racing Battles to the Finish at Sebring


After a day of unfortunate circumstances, Jr III (“Junior Three”) Racing completed its weekend at Sebring International Raceway on Saturday – the second stop on the 2021 IMSA Prototype Challenge calendar. more >>


Trans Am Returns to the Charlotte Roval after 21-year Hiatus, livetiming


The Trans Am Series presented by Pirelli will visit Charlotte Motor Speedway for the third time when the new Trans Am ProAm Challenge debuts during the SVRA Charlotte Speed Tour on March 19-21. more >>


TPC Racing To Lean on Porsche Roots for 2021 Season


Round 2 of 2021 IMSA Prototype Challenge Championship this weekend
Returning to the site of the team’s best IMSA result to date, Jr III (“Junior Three”) Racing more >>


Following the introduction of Mazda’s Women in Motorsports Initiative at the 2020 MX-5 Cup shootout, the Japanese auto brand has committed to keeping the program in place for the foreseeable future.  more >>


…two deadlines are coming even quicker. First, advance ticket sale prices end March 8,2021Second, we offer our loyal patrons something new, a chance to purchase event merchandise and have it delivered to your address before more >>


The Idemitsu Mazda MX-5 Cup presented by BFGoodrich® Tires has added Sebring International Raceway to its 2021 itinerary, which makes it the next event on the series schedule. Following a bl more >>


–  Hopes of third win in 24 Hours of Daytona soon dashed


After a very promising start the of the 24 Hours of Daytona, which had Ben Keating on the #52 Wynns / Rain-X / Four Horsemen / Max Connect / Client Command / Valkyrie.ai AI Oreca 07 LMP2 starting from the pole position, PR1/Mathiasen Motorsports had to finally retire 40 minutes before the end of the 24 hour race. more >>


Fierce fight to the finish as Justice Brothers Factory Squad Continues Streak Justice Brothers rode with Wayne Taylor Racing to the overall victory for the third-consecutive year Sunday in the Rolex 24 At Daytona, co-sponsoring the winning N more >>


The IMSA WeatherTech SportsCar Championship curtain-raiser didn’t take off as Mario Farnbacher and his team Magnus with Archangel had hoped. After tyre damage and technical problems, the Acura driver and his teammates Andy Lally, John Potter and Spencer Pumpelly had to settle with eleventh place at the Rolex 24 at Daytona.           &nbs more >>


French constructor Ligier Automotive scores its second victory and a double in the 24 Hours of Daytona!


A red-letter weekend for the French constructor!  It’s the second time that Ligier Automotive has won the 24 Hours of Daytona.  The first was in 2016 with the Ligier JS P2 entered by Tequila Patron ESM, which was also the first, and so far, only, v more >>


Podium Debut for Sean Creech Motorsport in Rolex 24 at Daytona

Fri Mar 19 , 2021
The Rapha Explore Powerweave is a new premium gravel shoe that uses the brand’s Powerweave knitted upper. The form-hugging fit of the shoe is superb, the sole is exceptionally grippy and they look super cool. The flexible sole won’t appeal to go-fast racers, but for casual gravel riding and bikepacking […]

Try your own business