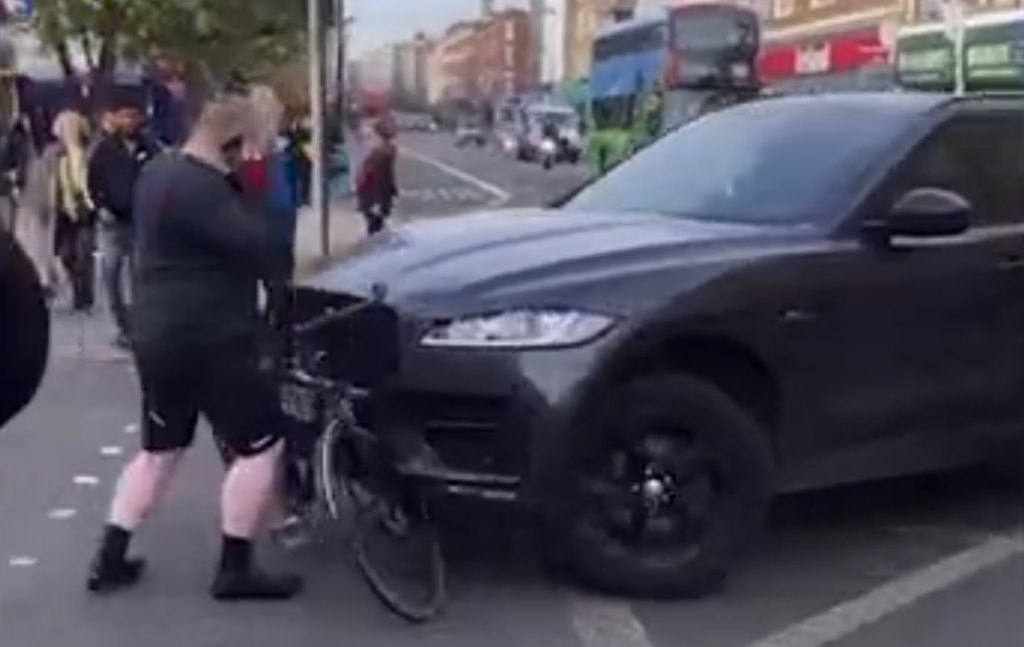 A short video of an altercation between a cyclist and a driver in a Jaguar F-Pace in London, UK, has been making the rounds lately. Now, we’re getting details from the bike rider about exactly what went down. Here’s how he justified standing in front of an SUV before his bike was demolished under its wheels.

In the short film, we see a cyclist standing in front of a Jaguar F-Pace. The rider is holding their phone to their ear and between them and the SUV is a dark-colored road bike. Not long after the start of the video, the SUV advances toward the bike, pauses, and then ultimately crushes the bike.

Thankfully, the cyclist gets out of the way without harm. What we don’t see is exactly what leads up to the altercation. Here’s what the cyclist says happened in the lead-up.

More: Audi Working On Connected Technology To Protect Cyclists On The Road

A neighbor shared this with me earlier – very dangerous behaviour by the driver. I know police were called. #RoadRage #suv #cycling #usingcarasclub @LifeInKilburn @MPSQueensPark pic.twitter.com/nM12rVQjEs

I was on the phone to the police,” he said to Road.cc, “here’s what happened. I was cycling northbound on Kilburn High Road, the driver tried to turn across me into Brondesbury Road.

“He did managed to stop without hitting me, but I stopped to tell him he needed to be more careful, he immediately moved forward fairly slowly, pushing me and the bike a metre or less, I said now I needed his insurance details as he may have damaged my front wheel.

“He exited the vehicle and shoved me to the ground, that’s why in the videos my bike is no longer facing north.” So from what we’re learning here, there seems to be no definitive reason that this altercation even needed to take place. The rider was unharmed, his bike’s frame was unharmed, and the Jaguar was unharmed. All that needed to happen was for all parties to ride away.

How the driver might have damaged the cyclist’s front wheel while also stopping without hitting the cyclist we can’t say. According to a local news article, it sounds like the driver wasn’t charged with anything too serious. Details have not been released.

It’s very much worth noting that this is only one side of the story and that perhaps there’s a lot more going on that we don’t know about. Standing in front of a car is objectively a bad idea though.

As a driver and a cyclist, I can confirm that there are a number of ways to drive and ride a bicycle without being a hazard to others. In this case, it certainly seems as though ego got the best of both individuals.