It’s been the case for a while, but we’re still coming to grips with the fact that the 911 GT3 is the only 911 you can buy without a turbocharger. Tucked behind the rear wheels is a high-revving 4.0-liter flat-six that’s closely related to the engine that Porsche offered in the limited-production Speedster last year. Like the Speedster, six throttle bodies feed each cylinder to offer better throttle response and increased tumble to boost combustion. Quick and linear reactions are a hallmark of a great naturally aspirated engine, and the GT3 spins up as if unencumbered by a flywheel. And you’ll want to rev it. Lacking the turbochargers that smother intake and exhaust notes, this 4.0 sounds like it belongs on the starting grid at the Rolex 24 Hour. Despite a torque peak of 346 pound-feet at 6100 rpm, this engine doesn’t feel as peaky as the specs indicate thanks to that moderate displacement. It might not have the low-rpm shove of Porsche’s turbocharged sixes, but it moves the GT3 without much effort, even if you never swing the needle past 4000 rpm. Shifting early is certainly possible, but the real joy is hearing the scorching six fire into its 9000-rpm redline. Horsepower—now 502—peaks at 8400 rpm.

Pumping sound into the cabin has become a thing because turbochargers inhibit intake and exhaust noise. No such trickery is necessary in the GT3. To save 26.2 pounds, Porsche removes the rear seats and some of sound deadening in the rear bulkhead. The added benefit is that you can more clearly hear the gurgling and breathing of the six’s intake and exhaust. Running from idle to redline fills the cabin with guttural chortles that turn to a sawing scream as the engine charges to 9000 rpm. The German-market version we drove came with the Europe-mandated particulate filter in the exhaust. Despite that filter, the exhaust barks, snarls, and in general puts a goofy grin on your face whenever you accelerate. But don’t expect an aural revelation when cars arrive in the United States this fall; we’ll get the same exhaust but with a dummy filter to mimic the back pressure, saving Porsche some development dollars.

Porsche quotes a zero-to-60-mph time of 3.2 seconds for the GT3 equipped with the dual-clutch automatic. That number strikes us as conservative, since the last GT3 hit 60 mph in 3.0 seconds. Unlike the rest of the 911 range, the GT3’s autobox has seven instead of eight speeds. The gearbox is closely related to the last GT3’s, which means that it was easier for Porsche to carry over the traditional shifter instead of the eight-speed’s electronic toggle. Not only do you get a more intimate interaction, but the shifter itself looks a bit like it belongs to a manual gearbox, which is sure to fool at least a few of the folks who peer into the window.

Although it’s possible to select gears via the shifter or the paddles on the steering wheel, the automatic’s brain has been programmed with situational awareness that always has it in the right gear. Just as you’d do with a manual, the automatic downshifts under braking to prepare you for an upcoming corner exit, and it’ll hold off on upshifts if you’re working hard. When an automatic is this good and does exactly what you’d do, it removes the sting of not being able to reach over and row the shifter or execute a crisp heel-toe downshift.

Fortunately, that’s an option, too. A six-speed manual, the transmission selected by 70 percent of U.S. buyers the last time around, is back for 2022. According to Porsche’s numbers, the three-pedal version adds 0.5 seconds to the new GT3’s zero-to-60-mph time, a minor penalty for what we believe will be greater driver involvement. As a consolation prize, manual GT3s have a slightly higher claimed top speed, reaching 199 mph versus a mere 197 mph for PDK cars.

In addition to the quicker shifts, the automatic features idiot-proof launch control that raises the revs over 6000 rpm before slamming the clutch plates together with precisely orchestrated violence. Pressed into the single-piece “full bucket” seats ($5900) with the engine wailing from behind, you can’t help but think of the air-cooled cars of the past as the sound fills the cabin.

Like a siren’s song, the incredible flat-six has distracted us from discussing the changes to the GT3’s front suspension. Born of the need to homologate the 911 GT3 Cup racer’s control-arm front suspension, the strut-type layout that 911s have used since the 1960s is tossed aside for this model. Bolted up to the 992-generation’s wider front end is a forged-aluminum upper and lower control-arm setup unique to the GT3. The advantages of control arms over a strut are well known and nothing new. Adding an upper control arm reduces friction, keeps longitudinal forces from affecting the dampers, stabilizes the tire under cornering pressure, and helps minimize brake dive without having to stiffen the spring rates.

Wider wheels and tires are fitted all around. Michelin Pilot Sport Cup 2 rubber is standard, but even stickier Cup R tires will be optional for the first time in a non-RS model. Grip levels are stunningly high, but it’s the way the GT3 conquers turns that will impress even a prior GT3 owner. Turn-in is sharp, but without any nervousness or edginess. A standard rear-steering system is tuned to keep the big 315/30R21 Michelins working in concert with the 255/35R20s in the front, shrinking or stabilizing the car depending on your cornering speeds. Keep adding speed, there is no fazing the GT3.

Ball joints replace most of the rubber in the suspension. Little vibrations that would be sopped up in a normal 911 ripple through the steering and right past the light padding of the $5900 Full Bucket seats. You’re suddenly keenly aware of the size and shape of the aggregate used in the asphalt or concrete rolling underneath—definitely a medium coarse rounded granite. The vibes aren’t annoying, either. They’re just a clearer connection between you and the car.

Working to keep the vibes from becoming too harsh are the standard adaptive dampers. Fitted with new internals and reprogrammed, the ride is definitely firm, but the dampers have the ability to take most of the sting off of cracked and lumpy pavement provided you leave them in Normal mode. Switching to Sport mode moves the baseline up on the dampening curve and will send your untoned bits jiggling on concrete freeways. You’re better off in Normal, since the dampers automatically harden in response to cornering loads, wheel travel, and body motion. Basically, Sport mode is always lurking in the background, just push the car harder to activate it.

All of those changes culminate in the best steering feel of any car for sale today. Kicks from the pavement course through the steering wheel and paint a clear picture of the Michelins’ stress levels. No other carmaker does electric power steering this well. Everything that happens at the Alcantara-wrapped wheel is accurate and natural. There’s so much information going into your hands that it seems like there’s no assist at all.

We’ve yet to weigh the new GT3, but Porsche promises a 3164-pound curb weight, or nearly 200 pounds less than a standard Carrera model. To get the GT3 down to a fighting weight, Porsche pulled out pounds and ounces. In addition to ditching the rear seats and some sound-deadening material, the GT3 comes with a carbon-fiber hood that combines with new front and rear fascias to drop 6.6 pounds. Ditching a ratio in the dual-clutch box is good for 44 pounds, a plastic oil pan is a major contributor in the engine’s 16.7-pounds reduction, and the new exhaust system is 22 pounds leaner. Lightweight glass is used throughout for a 10.4-pound savings. Despite a half-inch increase in width, the new front wheels lose 3.0 pounds. Going for the optional carbon-fiber roof seems frivolous, as it only saves two pounds, but dropping two pounds from the roof lowers the center of gravity more than if that two pounds were lost lower in the car.

Look through the rearview mirror and you get an eyeful of the adjustable carbon-fiber rear wing. Suspended by swan-neck attachments that keep airflow under the wing—the more important surface when creating downforce—moving more efficiently, the new wing design and a new rear diffuser increase downforce by about 50 percent versus the last GT3. A wingless Touring version is in the works, but unlike the last Touring, it’ll offer a dual-clutch automatic in addition to the six-speed manual.

In keeping with its upgraded power and suspension, Porsche fits correspondingly giant brakes to the GT3. The standard rotor size increases to 16.1 inches in front and 15.0 inches in back. Now nearly as large as the optional carbon-ceramic rotors, both rotor types come with six-piston front calipers and four-piston grabbers at the rear. With the carbon-ceramic rotors, the braking power and the grip of the Cup 2 tires is so alarming that you should check your six before you stomp the brakes—chances are slim that any vehicle behind you will be able to decelerate as hard, and you don’t want to be rear-ended by a highway-patrol Explorer. At anything less than a stomp, the brake pedal is easily modulated and never falters. The carbon-ceramic setup, designed for merciless track use, never showed any signs of distress or fade.

After six hours tearing around Los Angeles and playing on San Gabriel Canyon Road out of Azusa, it was time to return the GT3. Giving up a GT3 isn’t easy, but there’s a satisfying afterglow when you’ve driven hard in a great car. Happy memories commingled with the nervous energy of residual adrenaline as we handed back the key. The last GT3 left us in a similar state of mind—a mix of awe, relief, and joy. The new GT3 isn’t hugely different from its predecessor, but it’s incrementally better, and not just in terms of drag-strip numbers or lap times. This car is incrementally more direct, a bit more involving, and more alive. If the naturally aspirated engine ever comes to an end, this GT3 will be remembered as one of the great ones.

Thu Apr 22 , 2021
The United States on Sunday warned Moscow of “repercussions” if the hunger-placing Kremlin critic Alexei Navalny dies in jail, as the opposition politician’s workforce known as for mass protests across Russia to assist save his daily life. A day after Navalny’s doctors claimed Vladimir Putin’s most distinguished critic could die […] 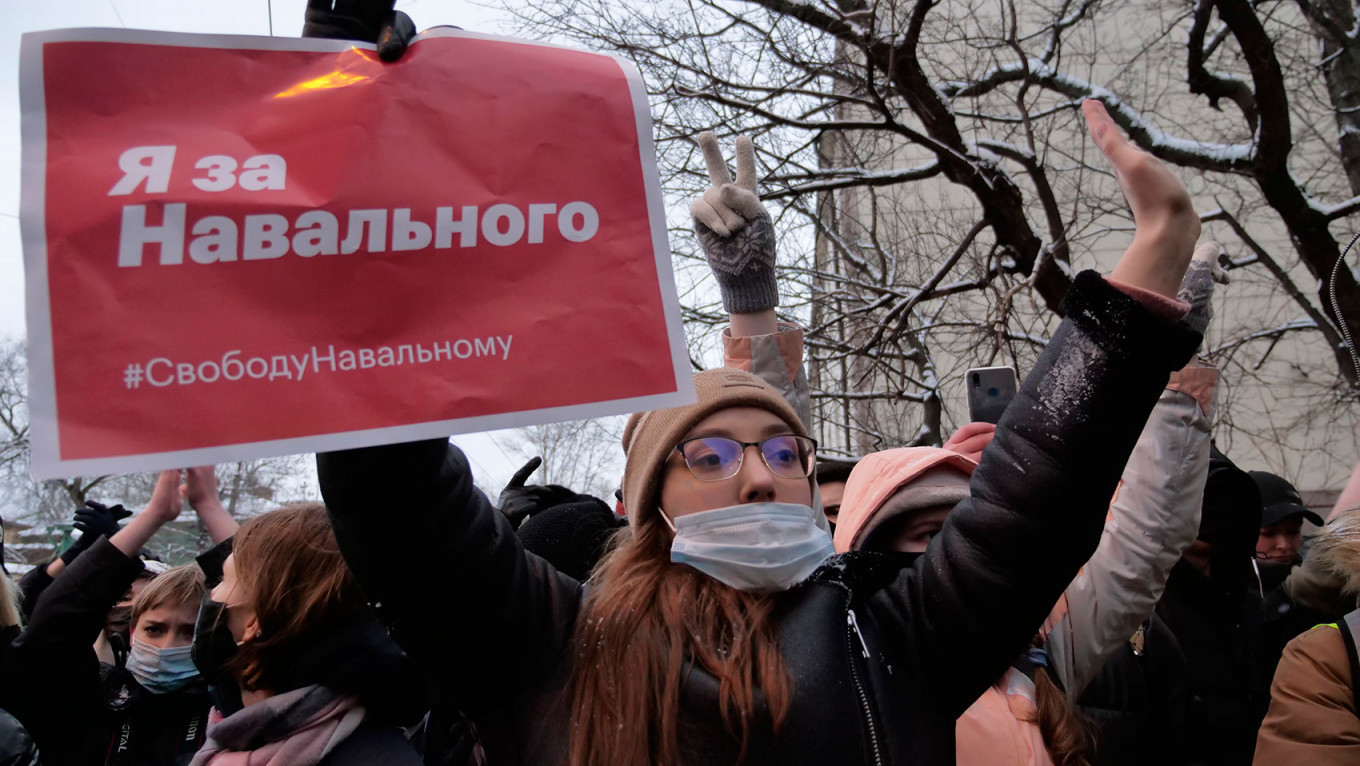