“Whoa,” my friend and photographer Dean Zatkowsky exclaimed as we opened the hood of the 2021 Maserati Ghibli Trofeo. “That’s like, a real engine. And I like that little carbon fibery thing on top of it.”

At this point plastic engine covers are so ubiquitous that the sight of an engine when a hood is opened can be startling. Enough to make you rip the hood off and drive this thing around so everyone can gawk at the engine. This is a car built for display at the Concorso Italiano circa 2061. Of course, by then, if cars aren’t floating around on anti-gravity devices and powered by Fresca it will be disappointing. But your grandchildren may (or may not) appreciate the sight of an actual internal combustion engine.

But right now, the Ghibli Trofeo is, well, intriguing. Yes, its reputation for unreliability is frustrating. Yes, its depreciation curve is shaped like the path of a shrieking Curtiss Helldiver aimed at the deck of a Japanese carrier. But it has its own vibe and that’s endearing. Assuming, that is, you haven’t been sucked into the fundamentalist cults of BMW M or Mercedes-AMG.

The Ghibli is Maser’s mid-size sedan. About the same size as a BMW 5-Series or Mercedes E-Class. It’s 118.0-inch wheelbase is 2.3-inches longer than that of the E-Machine, but at 195.7-inches in length, it’s about three-quarters of an inch shorter. This particular Ghibli – the M157 – has been around since 2013 and the only reason it’s not more familiar is that so few are sold. Remember, the low-spec E-Class is used as a taxi in Germany. BMW 5-Series are cop cars. The Ghibli is not a cab.

The Ghibli name has been used on Maseratis both glorious and disreputable since 1967. The original Ghibli was a slick, Giugiaro-designed fastback that looked like a stiletto on four wheels. It was powered by Maserati’s own V-8 and is now a classic of sorts. In contrast, the Ghibli built from 1992-1998 was a riff on the despicable Biturbo coupe that wreaked of stopgap desperation. So, pick the heritage that works best for you.

The new Ghibli’s bare powerplant is a Ferrari-based 3.8-liter, twin-turbocharged V-8 rated at 572-horsepower and 538 lb-ft. That’s an admirable output, but it pales in comparison to direct German competition.

BMW’s M5 Competition uses a 4.4-liter, twin-turbo V-8 rated at 617 hp. The Mercedes-AMG E63 S runs a 4.0-liter twin-turbo V-8 with 603 hp. And the Audi RS7’s 4.0-liter twin-turbo V-8 produces 591 hp. The German V-8s are all sophisticated engines with loads of valves, many camshafts and brilliant engine computers. And they all feel very much alike in character. They have oceans of low-end torque that allows the cars to loaf at low engine speeds. The Maserati engine, in contrast is nervier and more anxious to romp. It is, to throw in some cultural shade, so fricking Italian.

Or, if power is all that matters in a sedan, there’s the 797-horsepower Dodge Charger Hellcat Redeye. Which after much corporate shenanigans is somehow the Ghibli Trofeo’s raucous American cousin. What the two share is the same German-made ZF eight-speed automatic transmission. And a certain unabashed exuberance.

Unlike the Germans, the Maserati V-8 keeps its two turbos outboard of the engine block. While the Deutschland Zeitgeist says that turbos belong in the valley between the cylinder banks of a V-8’s block where the intake runners can be short and boost doesn’t have far to travel into an engine. Those short intake passages are the holy grail of low-end torque production. As low-end grunt isn’t a Maserati obsession, some perceived lag before the turbos hit isn’t a major frustration. What comes in compensation is a zippy eagerness at low-end. Plus maybe the Maserati couldn’t use all that much more low-end anyhow.

That’s because while the German competitors have adopted all-wheel drive, this Italian is still RWD. It simply doesn’t have the traction to do the max-wallop hard launch of an all-wheel drive machine. Dial up the Ghibli Trofeo’s launch program – “Corsa” mode, steering wheel pointed straight ahead then hold down the brakes and accelerator simultaneously – and the car seems to momentarily consider whether or not the driver is seriously contemplating such a hardcore activity. Then when the brake is released the Trofeo rips forward. There’s a touch of wheel spin because the computer needs some information before deciding the ideal amount of thrust to unleash. There’s no bark from the rear Pirelli PZero PZ4 tires and the front end plants with serene steadiness. Maserati claims a 0-to-60 time of 4.0 seconds and it’s likely a touch – a couple of tenths – quicker than that. But it’s still not as quick as, say, the BMW M5 Competition. In testing for Car and Driver, that beast whomped to 60 in a staggering 2.8-seconds.

Maserati further claims the Ghibli Trofeo will track all the way to 203 mph. That matches the number for the Charger Hellcat Redeye.

Life, however, isn’t all about 0-60 times and top speed. Few Maserati owners will be facing down an M5 in a drag race and any road in America long enough to hit that 203 mph maximum velocity isn’t headed anywhere interesting. Plus there’s all that prison time. In daily use, the Ghibli Trofeo purrs through life. The ride is well controlled, the exhaust note is soothing, and pointed toward the horizon it gobbles up miles like a personal jet. In practical terms, assuming everything is working as designed, it’s as good as any German blitzwagen. Even its 16 mpg in the city and 20 mpg on the highway EPA mileage numbers are reasonable considering its performance.

Also it’s not that expensive. Of course, the Ghibli Trofeo is expensive with a base price starting at $111,735 including a $1495 delivery charge. But it’s comparable to the competition. The total for this hyper-optioned example – including $6500 for those stripes – is $128,135. That’s chump change – depending on your definition of chump.

Another distinction in the Maserati’s favor is the interior design. Where the competition has gone in for digital screens and gesture controls and loads of tech it will take the length of a lease to learn, the Ghibli is straightforward. It still uses real dials and with white needle pointers. There’s some carbon fiber trim, but most everything else is covered in velvety leather. It’s also roomy enough. The one concession to modernity is the 10.1-inch touchscreen that’s been planted into the dash for 2021. Of course, it integrates with Apple CarPlay and Android Auto, because there isn’t a new vehicle that would dare not to.

Context is everything when it comes to a car like the Ghibli Trofeo. It looks great with the green and red stripes announcing its heritage. Its styling is swoopy and enticing when so many other sedans have become blocks of iron will bulldozing forward. It’s still not an SUV – though Maserati will be fine selling anyone a Levante. It’s never at home on a racetrack, but it’s not just another sedan in the executive parking lot. It’s surely not for everyone. The question is whether there are enough rebellious romantics out there who want it.

Wed Sep 8 , 2021
RALEIGH, N.C. (WNCN) – There is been a dramatic maximize in frauds in the course of the previous calendar year the place con artists send out out email messages and texts hoping to reel in victims. It is known as phishing. Now there’s a warning about a person phishing fraud […] 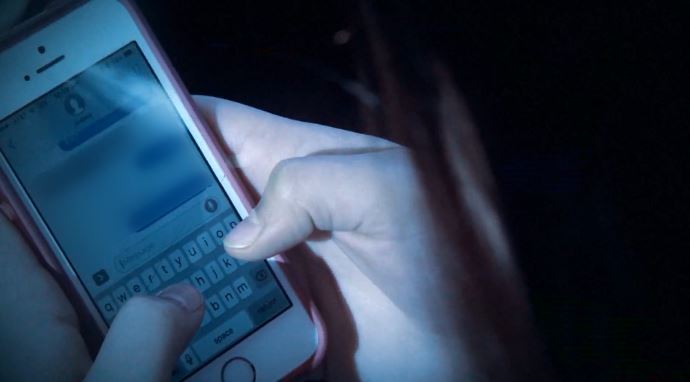